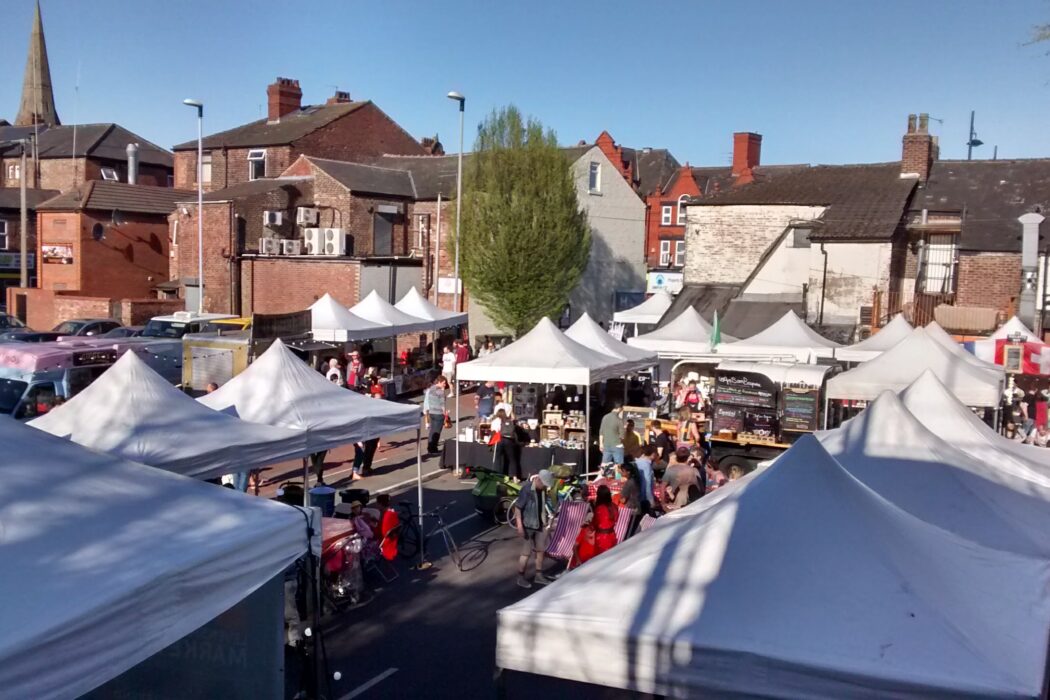 We’re absolutely thrilled – and more than a little relieved – that our planning permission was unanimously approved at its hearing at the planning committee last week.

What does this mean? We have secured permission for Levenshulme Market to continue operating for a further four years. So you can keep visiting each week and we can keep supporting small independent businesses by bringing them to Levy.

Huge – HUGE – thanks to each and every one of you who wrote in to voice their support for what we do. We encourage all of you to celebrate by coming down to the market and support our traders by treating yourself!

Getting to this stage has been a very challenging process, so much so that we thought it worthwhile to document some of the experiences we’ve gone through which other similar organisations might find useful in future.

In 2019 Andy Burnham made a public call for Greater Manchester to become the UK capital of social enterprises. “Social enterprises are the future,” he declared. So how did it come to be that two years later, volunteers from Levenshulme Market CIC, an award-winning social enterprise, had to go before Manchester City Council’s Planning & Highways Committee to fight for its right to continue existing?

Due to the national restrictions, last year saw us lose exactly 50% of our 2020 trading dates. This had the knock-on effect of traders losing their income. Anyone who followed our social media posts during lockdown will be aware that a great many market traders discovered they were also excluded from the government financial support due to the way their businesses are organised. Many of them were desperate to trade with us as much as possible when we were able to re-open in order to avoid their businesses going under. However, in order to keep our community safe, we have been operating as a Shop & Go model, at a reduced-capacity that allowed us to accommodate various social distancing measures. This meant that each week we were both losing revenue while simultaneously turning away large numbers of struggling traders.

There only seemed to be one solution to this: open the market on some additional dates. So we made a request to the council that Levenshulme Market be permitted to open on two Sundays in December. This, we argued, would help out more traders and would also spread out our anticipated Christmas shopping footfall, meaning fewer members of the public queueing and congregating. We assumed this would be welcomed by MCC given there were a large number of media reports about planning and licensing laws being relaxed to help the hospitality industry recover from the lockdown.

However our request was turned down by the council. Trading on Sundays wasn’t something that was included in our existing planning permission. We were informed that if we wanted to open on any additional dates we would need to get a new planning permission – a time-consuming undertaking but one which we knew we needed to get in place in 2021.

So that’s what we did. We drafted our new planning application for the market to continue its operations early and also included a couple of small changes – a request to be able to open the market on no more than 12 Sundays each year and the permission to open in January and February. We didn’t have much in the way of plans on how to use these additional trading dates, but we felt they would give us some flexibility following on from the months of uncertainty and financial loss uncertainty we’d gone through.

However, the inclusion of these two small changes caused a number of administrative council issues to pop up, ranging from everything from acoustic reports through to legal contracts, each one baffling in its bureaucracy and draining in the time it demanded of us. We also learned that our planning application would have to go before Manchester City Council’s Planning & Highways Committee, something ordinarily reserved for the more controversial planning applications – historic buildings being demolished, new high rises in the city centre, etc. Not a weekly community market, which has been running for eight years. These committee hearings take place once a month and are rather like trials, with arguments made for and against each application and a decision taken by a group of councillors.

Between February 2021 and July 2021 there were a total of five planning committee hearings, each of which we expected to attend in order to argue the case for Levenshulme Market continuing. But each time, as we were getting ready to attend and represent Levenshulme Market, we learned a new issue within the council had arisen which meant we had to wait another month. All the while the clock was ticking on our existing planning permission. We had allowed for eight months before it lapsed but as this process dragged on we began to worry. What would we do if time ran out? There was only one logical answer: if our planning permission expires and our new one hasn’t been granted, Levenshulme Market would be forced to close down.

As you might expect, we asked our local councillors for some support to avoid this happening but this wasn’t something they were willing to offer.

So safeguarding the future of the market is something we’ve had to do ourselves – we’ve been in touch with endless council departments, their sub-departments and their legal teams. The resolution of each issue we encountered seemed only to then generate further administrative obstacles from separate council departments who we would then have to liaise with, explaining from scratch what Levenshulme Market is and what we were trying to do. And each time we redrafted our planning application in order to accommodate these issues. And each time we stripped something out of our planning application, meaning our hopes to be able to open the market on a Sunday or in January or Febuary went too.

Finally, we learned a couple of weeks ago that the application was in a state that would be acceptable for inclusion in the July Planning & Highways Committee meeting. By this stage, the application had been so pared back it was effectively a request for a continuation of our existing permission, so we were confident it would be given approval.

However, we were then informed that since we had drafted our planning application a local supermarket had for weeks been encouraging its customers to sign a petition opposing the closure of a section of the car park on Sundays, attracting nearly 300 signatures. Although Sunday markets were something we had ditched in order to get our application before the planning committee, this new opposition was to be included as part of our hearing and we became once again severely concerned it would prevent the market from achieving planning permission by giving an unfair negative impression of the market to the committee members. Hence why last week we encouraged our customers and traders to submit some statements of support – we were overwhelmed by the response, garnering messages from over 280 people over the course of four days.

“We need to pass power down to people and our communities,” Andy Burnham said in 2019 during his speech at the UK Social Enterprise Awards. This is a noble sentiment and one which we very much share, but it’s sadly not one which seems to be matched by any support from those in power, at least not in the journey we’ve undergone over the past few months. Our experience has been draining, confusing, costly and intimidating. Above all it has served as an ongoing reminder of how little power we have. Levenshulme Market is run by a group of volunteer residents in their free time alongside our own work and family life commitments in order to support our neighbourhood. We don’t have a legal team or a planning department – we don’t even have an office! What we encountered was planning system and local authority infrastructure set up to demand that such a complex and unclear process be followed by an applicant with little in the way of support or guidance.

This makes it far more likely that only those bigger, wealthier companies will thrive, while smaller social enterprises like ours will struggle to support their communities.

Levenshulme Market is here for another four years. Which is great news and an enormous relief. But the lesson for us is that, while Levenshulme Market may be thriving – with thousands of customers each week, awards under its belt, generating enormous high street footfall, organising financial projects to support our local area – there’s no assurance it won’t find its future at risk once again. We dearly hope we won’t have a repeat of this ordeal in future, but in four years’ time you could once again be called on to help keep Levenshulme Market open.

But until then, please celebrate by popping down to the market and doing what you do best – enjoying yourselves, coming together as a community and spending time with one another in the place we all love.