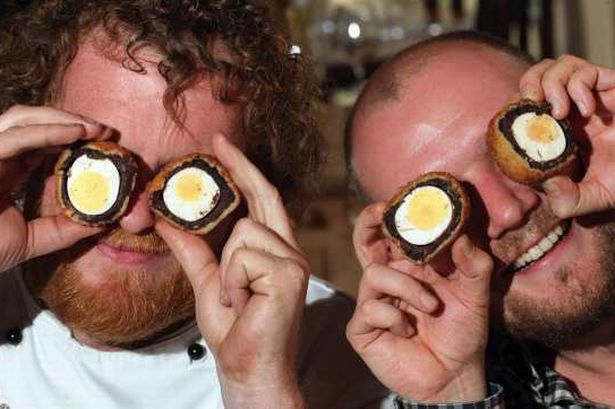 We are absolutely delighted to announce that joining our speciality food and drink market this Saturday is Manchester’s finest real food celebrity chef – Robert Owen Brown, who will be serving up portions of his unique creation – the Manchester Egg – at a street market for the very first time!

If you’re not sure what a Manchester egg is then you’re in for a real treat – a reinvention of the traditional scotch egg, the dish packs a proper Manc punch with a pickled egg centre encased in Bury black pudding, coated in breadcrumbs and fried. It may seem like a bold idea but it’s nothing to Robert who is well known for his ambitious and inventive cooking style and recently published his first book – Crispy Squirrel and Vimto Trifle.

When we asked him why he’d chosen Levenshulme as the venue for the egg’s street market debut he said “It’s a great market! It’s fantastic to see somewhere that supports traders and gives them the opportunity to get their product out to the public, as well as generating support for the local community. So to be a part of something like this is a real pleasure.”

Also worth knowing is that the egg was developed by Ben Holden – a long-time Levenshulme resident and supporter of the market who worked with Robert to help him bring it to diners plates when it featured on the menu at The Mark Addy. For more info about the egg’s journey see the coverage it’s had in the Guardian and the Independent.

The market will run 10am – 4pm this Saturday at Farmside Place off Stockport Road in Levenshulme with over 50 traders selling the very best of the North West’s food and drink produce plus plenty of street food, a traditional British cafe and a full bar to wash down your egg.